In my day to day work which is largely procedural, bruising is a common and often expected occurrence so it’s important that I educate patients on what to expect and when to worry.

Nonetheless, for someone who’s new to the world of either skin cancer surgery or injectables (or both) it can be initially fraught, knowing when to worry and when to relax and let nature take its course. 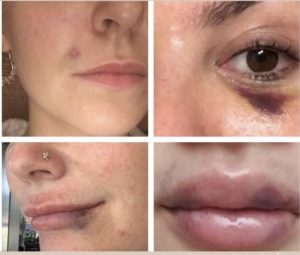 Bruising is among the commonest and expected side effect of procedural work that breaks the skin, by far, and anyone who promises you won’t bruise is either lying or inexperienced.

Equally, patients sometimes get impatient or have unrealistic expectations of how quickly a bruise ought to resolve. So here is some basic information to help you out.

What is a bruise?

A bruise, by definition, is an injury appearing as an area of discoloured skin on the body, caused by either blunt trauma eg a fall/ blow or impact rupturing underlying blood vessels.

In the case of injectables and other skin penetrating treatments, this can also be caused by sharp instruments working in a similar fashion. 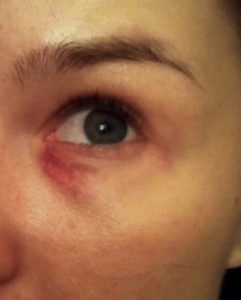 The blood leakage from ruptured blood vessels collects under intact skin, and pools there, and over the coming days to weeks, as the body breaks the haemoglobin in it down, changes colour, from reddish to purple/ black to green and yellow before eventually returning skin to its normal colour.

Most facial bruises do not require medical attention and will resolve over coming days to weeks and change colour in the process as the blood is broken down and removed from the skin.

How do I treat my facial bruising post injectables?

Most treatment is simple and consists of the following steps.

How quickly will my bruise be gone? 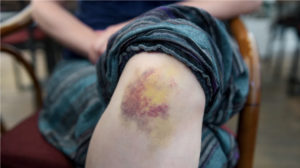 In most cases, your bruise will be gone — or almost invisible — in about two to three weeks.

In response to initial injury, skin may typically look pink or red, changing colour to bluish-purple soon after or within a day or two as the blood that has collected at the injury site changes color. Around 5 to 10 days, the bruise turns a green or yellow color. At 10 or 14 days, the bruise’s colour will be more of a yellow-brown or light brown. This is the final stage of your body absorbing the collected blood. The color will gradually fade away, and your skin will be back to its normal color by 2-3 weeks.

If the bruise doesn’t seem to be changing, or appears to be getting bigger or still prominently present at around 2 weeks, touch based with your doctor to check all is on track.